Anyway I hope you guys like it. Be sure to leave a review for me and don't be gentle I want your honest opinion. The date went so much better than expected. For both of them. Lucy thought he was such a gentleman but was still kind of goofy.

He was going on a date. His first date. Natsu felt defeated. His face seemed to be permanently heated as the guild continued to make jokes about him and Lucy. His shoulders slumped and he fought his way to the doors of the guild. He had no idea whether or not Lucy thought this was an actual date. All he did was ask Lucy to go on a job with him…. There's nothing good on the job board and Natsu and I are supposed to go on a job today.

Mira couldn't help but grin at the mage, "Oh don't worry about that, Lucy. Natsu already has something picked out. Something special. Mira continued. Just as Lucy was going to chase Mirajane, a hand patted her on the back, "Good luck today, Lu-chan! She bumped into someone, Cana.

The card mage turned Lucy around and grinned. He's still very innocent. How sweet! Natsu fiddled around Lucy's door. He had knocked for the first time in a very long time, actually he couldn't remember a time when he had ever knocked.

He was wearing his usual attire, though the girls of the guild had tried to force him into a suit, but Natsu refused. If Lucy liked him, then it shouldn't matter what he wears, right? He looked Lucy up and down and let out a sigh of relief.

She didn't look much different than usual, in her navy-blue skirt and pink tank top. Her hair was done its usual manner.

She looked pretty, but she always looks pretty. Natsu blushed. Lucy always looks pretty? When had he began to think this way? Did he only just realize? Was this just a fact? Natsu remembered all the comments about the celestial mage when he first brought her to the guild. All the boys drooled over her, well except for himself. But here he was, thinking about how pretty this girl is. Her face had a light dusting of pink. Natsu found that it added to her beauty. Natsu handed her a flyer and quickly looked away, hiding his face in his scarf.

He could tell that Lucy didn't consider this a date. He inwardly cursed the guild for blowing things way of proportion. Objective is to have fun. Reward: having the best day ever. Natsu gave her a reassuring grin, "There's nothin' strange about this request, Lucy. You're just a weirdo so anything normal will seem weird to you, duh.

She sat across from Natsu and watched as he helplessly slumped against the window, holding back his vomit. She shook her head, "You poor thing.

About two hours in, Lucy realized a certain blue friend was missing, "Why didn't Happy come with us, Natsu? Natsu, who was now hunched over, looked upwards at Lucy, "He didn't…want to…third…wheel…" His head dropped back down to his lap. Her face turned bright red and her heart skipped a beat.

She was thankful that Natsu was no longer looking at her. Lucy giggled. Without hesitation, Natsu said, "I'm starving! Let's eat! 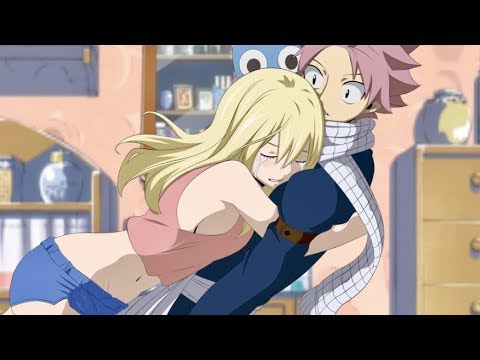 And to Lucy's surprise, Natsu actually laced their fingers together instead of his usual non-laced hand-grab. She did her best to ignore her racing pulse. They were seated down in a private booth. Natsu had ordered practically everything. Lucy settled with rice balls. Then for dessert, Natsu ordered them a fresh baked chocolate chip cookie ala mode. 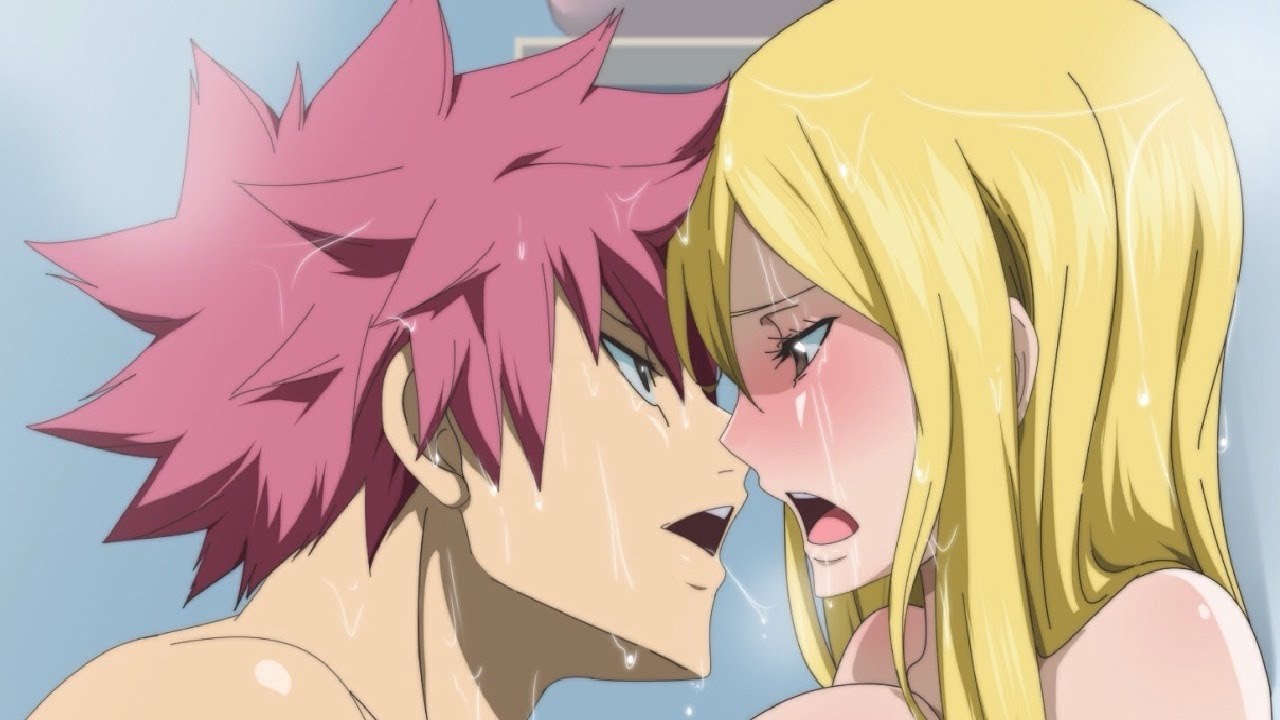 Lucy was a bit shocked that he wanted to share dessert with her and blushed whenever their spoons collided. It did seem a little romantic as Mira had stated.

The waiter put the check on the table as they finished scrapping the plate. Lucy went to grab the check, but Natsu beat her to it. After Natsu paid, he quickly laced their hands again. His heart was pounding against his chest.

He did his best to make the handholding as causal as possible. A grin that always managed to make her heart stop. They strolled the garden, hand-in-hand.

After their last mission, Natsu & Lucy start dating. When they get home, they forget to tell their friends. Will they found out? Plus, the enemy from. After several months of putting it off, Lucy is finally going on a date. She's been waiting for Natsu to come around for quite some time, but it. Everyone is tired of Natsu and Lucy ignoring their obvious attraction towards one another. So, one late evening in the Guild, decide to devise a.

Lucy couldn't help but notice how close they were walking. People would definitely think they were dating.

For some unknown reason, this made Lucy's heart sore. Natsu kept sneaking glances over at Lucy. She looked beautiful. Normal POV Natsu and Lucy entered the guild, laughing rather loudly which caught almost everyone's attention.

The Fairy Tail Mages stared dumbfounded at the duo who had ignored them and seemed trapped on their own little world. All are shocked. No one dared to say a word. They don't know how to react. They don't know which one was more shocking; that Lucy was laughing whole-heartedly while Natsu was grinning widely or that the blonde had the dragonslayer's most precious possession, his scarf, wrapped around her neck.

As if hearing him, the duo snapped out of their trance and looked around the guild almost questioningly. They locked gazes once again before shrugging, clueless. They high fived each other before going their seperate ways. Gray blinked multiple times and shifted his eyes between Lucy and Natsu.

Natsu-san, what Gray-san means is, what is y-your real relationship with L-Lucy-san? You would play the innocent and dense card, aye? Then tell us, why is Lucy wearing your scarf? So, i lend her my scarf to keep her warm. No big deal. I don't even know why your mad. The two mages in question looked at each other, shrugging but what everyone missed was the mischievous glint on the secret couple's eyes.

Or are you on your monthly period? Before you go sticking your nose on other people's business, why don't you face your own problems?! You don't have the right to lecture me about confessing cause the last time i checked, you haven't told Juvia about your feelings. To his luck, the mentioned Water Mage wasn't in the guild. She was out on a solo mission.

"You realize Lucy has blonde hair, right?" Where Gray and Cana tell Natsu about Lucy's 'date'. WARNING! MAY CONTAIN A JEALOUS NATSU. Lucy goes out on a date, too afraid to tell her partner and best friend. What will he do Natsu was the reason she joined Fairy Tail. He was the. Natsu and Lucy are dating, but they're keeping it secret. Lucy wants to spare Lisanna's feelings, so she'll go to talk to her. She finds out what all.

Go bother someone else, Stripper. Me and Lucy are going on a mission. The dragonslayer scanned the board before ripping out a specific paper that caught his interest. Natsu grinned and ran over to the blonde. He waved the paper infront of her almost enthusiastically. Getting what he meant, Lucy grinned and nodded at him. They both laughed, which earned them confused gazes. The white haired beauty tensed and but managed to put on a smile.

Just me and Lucy this time since she's short on rent money. But why just the two of you? If it's for rent money, would it be much better to take a harder mission with greater pay and bring a team to help out?

I want some alone time with my girlfriend since you all kept on stealing her from me! We can't have any alone time anymore! That's why i'm stealing her. The pyro smirked and swooped down to place a chaste kiss on the blonde's lips. The Celestial Mage shrieked at the contact. Natsu pulled away and grinned before completely facing the stunned guild.

The whole guild had their mouths open witnessing Natsu's declaration. Story Story Writer Forum Community. Gray looked at the furious Cana and walked in her direction, "Cana, did you piss in Natsu's Cheerio's?

Cana looked at Gray, holding her burned arm, and gave him a small smile, "Yeah, something like that…. I need some ice! Lucas you are too funny!

Lucy was sitting across from a very good looking man, dressed in a white and black dress that showed a lot of cleavage. Her hair was in a fancy bun and was currently dying of laughter. Suddenly, the doors of the fancy restaurant burst opened, revealing an angered dragon slayer.

Natsu ignored the stares everyone was giving him and walked straight towards the people at the reservation desk and shouted, "Is a blonde haired beauty named Lucy here?

Description: Natsu and Lucy had been dating for 3 months now, though the guild doesn't know about it. They maintained a low profile and hid it. When Creativity finally strikes for a new date idea, plans don't go Not to mention it was the evening Natsu and Lucy could finally take their. Lucy and Natsu go on their first date, and it all goes well, until things get a little out of hand in the car ride home. Modern AU. A smutty one shot.

The people behind the desk nodded slowly with fear and pointed towards a shocked Lucy and a confused Lucas. Natsu looked at the two and thanked the person at the desk. Walking over two them, Natsu's hand engulfed with flames, then extinguished them. The person Lucy was dating looked nothing like Gray and Cana described. He had brown hair and green eyes. I think Cana and Gray were lying to me…' Natsu shook that thought off as he finally approached their table.

Natsu sighed and extinguished his flames, "Well yeah, you're an ice dragon slayer so it's the perfect taunting name for you. I'm not even a mage! Natsu faced looked perplexed as he plopped himself on the floor sitting crisscross applesauce. Lucas rolled his eyes and looked at Lucy, "Uh Lucy? 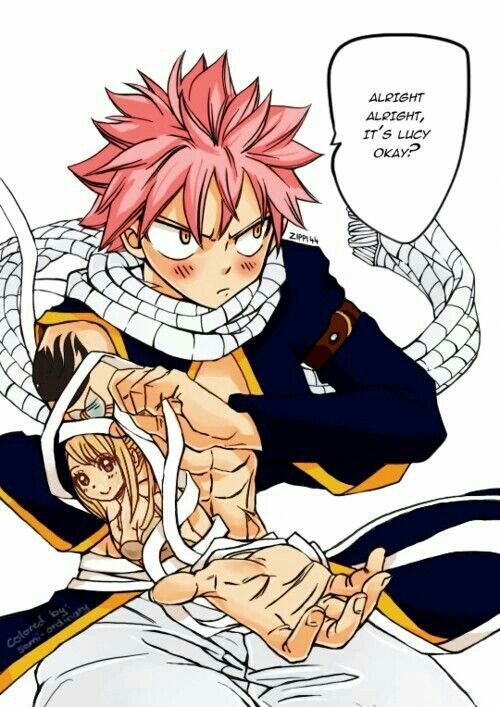 Interesting person right here for you. Lucy watched his retreating figure walk out the broken door and sighed, sitting with Natsu, "Why? And you just ruined it! 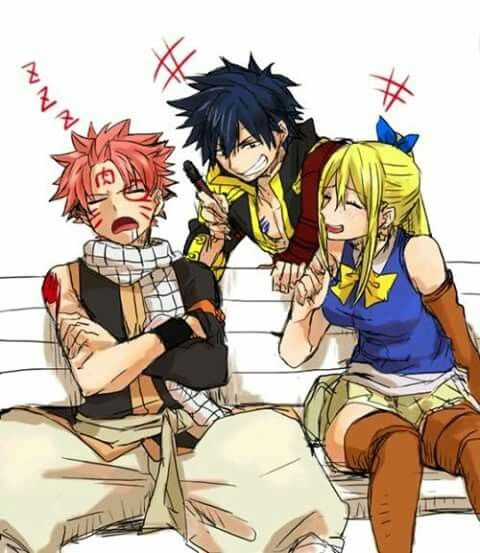 Not only will he never go out with me again, I have to use my perfectly good rent money to pay for the damages you caused! I just- I just… Uggghhh! I finally get good advice from Cana and I find a person that actually made me feel special-".

Well that shut Lucy up pretty good. They stayed in silence for a while, both of them blushing hard. Lucy took a deep breath and sat on Natsu's lap, gaining his attention. Lucy simply nodded her head, looking into his onyx eyes. Natsu smirked and leaned in, placing a sweet kiss on Lucy's lips. 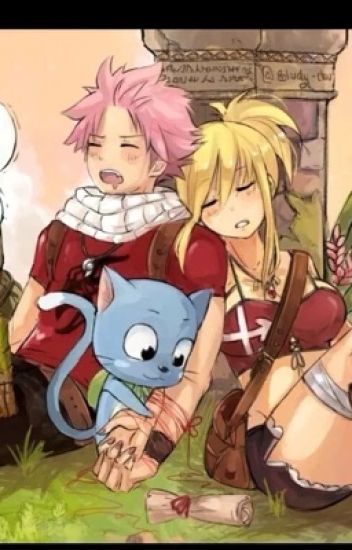 Lucy was a little shocked, but after a few seconds, gave in, making the kiss more passionate. Natsu wrapped his arms around her waist as Lucy wrapped her legs around his abdomen, wrapping her arms around his neck, effectively deepening the kiss. They were so consumed into what they were doing; they forgot they were in a restaurant. A worker of the restaurant walked up behind Natsu and coughed, snapping those two back to reality, "Um you guys are causing a huge disruption in this restaurant, I'm gonna have to ask you guys to leave…".

They both looked around and realized everyone was staring at them. He and a blushing Lucy, stood up and walk towards the broken doors.